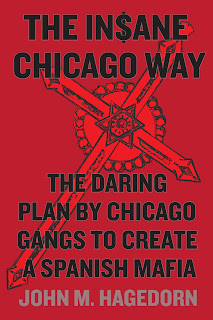 John M. Hagedorn is professor of criminology, law, and justice at the University of Illinois at Chicago. He is the author of People and Folks and A World of Gangs, coeditor of Female Gangs in America, and editor of Gangs in the Global City.

Hagedorn applied the “Page 99 Test” to his latest book, The Insane Chicago Way: The Daring Plan by Chicago Gangs to Create a Spanish Mafia, and reported the following:

Mo Mo as a kid always hung out with older guys, and his home became a gathering place for the mainly Italian C- Note$. He came to the attention of made guys early in life as their sons hung out with him, watching TV and rooting for the Cubs and other Chicago sports teams. What this did was put Mo Mo on a fast track into the C- Note$. He had a temper and streak of violence, but always was a thinker. Joey Bags picked him in that year’s C- Note$ draft. Sal remembers Joey’s standard advice to Mo Mo and his young charges that “anyone can be a thug, but it takes a real man to be a gangster.” This was the credo of C- Note$ members who aspired to go up the ladder into Outfit ranks as made men or associates.

Mo Mo became part of the enforcer team that went after rival gang members and kept C- Note$ in line. As a teenage soldier, Mo Mo was brought in repeatedly for questioning on aggravated battery charges and was arrested several times, but the charges never stuck. In 1989 after having been involved in some retaliation shootings and with mounting police pressure, Mo Mo left the neighborhood and joined the armed services. Later he would tell Sal that Desert Storm wasn’t nearly as violent as his life in Chicago. He was right at home with a gun, and he told Sal the war in Iraq was more “predictable” than Chicago gang wars.

Mo Mo led a wild life of trips to Vegas, blowing lots of money, and partying. But from his early twenties he also had a relatively stable relationship with Mercedes, a fun- seeking younger girl who knew from the start that she wanted them to get married. Mo Mo thus had a traditional relationship that Sal approved of, while he looked askance at Joey’s philandering. Mercedes was constantly pushing Mo Mo to get away from gangbanging, which pressured him to slide more comfortably into a lower-key Outfit orbit. Competing pressures to settle down and go for riches and power haunted Mo Mo throughout his life. Mo Mo’s more stable personal life is among the factors that convinced Sal that he was their man. Mo Mo came back to the neighborhood at about the same time that the C- Note$ were considering the implications of SGD.

The In$ane Chicago Way tells a heretofore unknown story of how Chicago Latino gangs tried to create a Spanish mafia and why they failed. In$ane explains how a coalition of Latino gangs, Spanish Growth & Development (SGD), was created by gang leaders to control violence, organize crime, and corrupt police. Law enforcement and even most gang members were not aware of the 10-year existence of SGD which ruled the streets from the Illinois prison system. SGD was not destroyed from outside by arrests but by an internecine war of the families, or rival groups of gangs. The book follows SGD from its origins to its bloody demise in an assassination of the steps of a peace conference.

Chicago’s mafia, the Outfit, was not an uninterested observer to these efforts. They worked backstage through their minor league team, the C-Note$, to influence SGD, particularly to control violence in order to safeguard profits. The book follows the exploits of the five principal C-Note leaders, who my Outfit informant called “Two Dagos, Two Spics, and a Hillbilly.” In order to infiltrate SGD, the Outfit had to overlook their Italian C-Note leaders and push forth a Puerto Rican, Mo Mo, as their de facto representative. Page 99 is a small glimpse into Mo Mo and why he became the Outfit’s choice as their covert liaison to SGD.

The book argues that this will not be the last attempt of gangs to organize crime. But the horrific wars of the 1990s undermined the legitimacy of Chicago gang leaders and offer unique opportunities to win youth away from the streets.

Learn more about The Insane Chicago Way at the University of Chicago Press website.

My Book, The Movie: The Insane Chicago Way.