Jo Napolitano's "The School I Deserve"

Jo Napolitano, a journalist for more than 20 years, has written extensively for The New York Times, Chicago Tribune and Newsday. A Northwestern University graduate 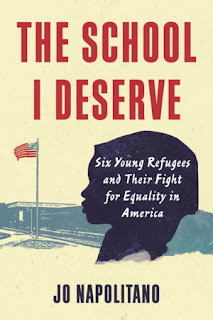 and Columbia University Fellow, hers was an unusual path: Napolitano was born in Bogota, Colombia, abandoned at birth, placed in an orphanage and nearly died of starvation before she was adopted to the States. Her book, The School I Deserve: Six Young Refugees and Their Fight for Equality in America, chronicles the civil rights battle waged across the country on behalf of immigrant children turned away from the nation’s public schools.

Napolitano applied the “Page 99 Test” to The School I Deserve and reported the following:

The book tells the story of a young Sudanese refugee named Khadidja Issa who was forced to sue her local school district for the right to enroll. The case went to trial in the summer of 2016 in the swing state of Pennsylvania on the eve of the most contentious presidential election in modern American history, one in which immigrants, particularly young Muslim refugees like Khadidja, were openly derided. In this passage, found on page 99, one of her attorneys calls into question the school district’s decision to send Khadidja and other young refugees to a for-profit alternative school called Phoenix Academy. Aimed at credit recovery, Phoenix offered a no-frills education to students looking to speed up their education to graduate quickly:

The notion that these newcomer students, who spoke almost no English, would somehow gain something by starting their education with sped-up instruction—the only type offered at the alternative campus—made no sense, he said.

Rothschild’s argument was solid and he appeared to be gaining ground. In what seemed like an early breakthrough, Judge Smith started to question the value of graduating a student who might not have the education or skills they needed to succeed in life. “I’m also curious as to the relationship between getting that piece of paper known as a diploma, and actually, truly, educating someone, such that they could be a productive member of our society,” the judge said.

Here was the opening Rothschild had been looking for all morning. It was his chance to plant the seed that Phoenix wasn’t living up to its promise.

Rothschild said that in order to judge the merits of the alternative program, the court must consider the Castañeda v. Pickard court case. Filed against the Raymondville Independent School District in Texas by Roy Castañeda, a father of two Mexican American children, the case was tried in the United States District Court for the Southern District of Texas in 1978. Castañeda, through his attorneys, argued that the district grouped children in such a way that those with Mexican heritage received a sub-standard education.

A major outcome was a three-pronged test to determine whether schools were taking “appropriate action” to address the needs of English language learners as required by the Equal Education Opportunities Act. According to the Castañeda standard, educational programs for non-English–speaking students must be based on a sound educational theory, implemented effectively with sufficient resources and personnel, and evaluated to determine whether they are effective in helping students overcome language barriers.

Phoenix failed by every measure, Rothschild told the court. And the diploma its graduates received at the end of their time there was dubious because many could not read or write English and had not advanced in their other coursework because of it, leaving them unprepared for the future, whether they wanted to attend college or join the workforce.

Page 99 reflects the central aspect of the book: what do we owe immigrant kids in terms of their education? If a child arrives to the States in their late teens unable to speak English, what can we expect of them as their eligibility for a free education winds down? It gives a glimpse into the courtroom drama of this entire matter.