Gail Crowther is a freelance writer, researcher, and academic. She is the author of The Haunted Reader and Sylvia Plath and the coauthor of Sylvia Plath in Devon: A Year’s Turning 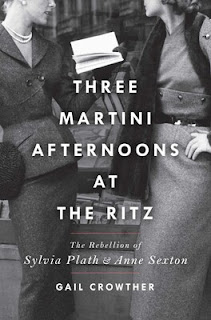 and These Ghostly Archives: The Unearthing of Sylvia Plath. Crowther divides her time between the North of England with her dog, George, and London. As a feminist vegan she engages with politics concerning gender, power, and animal rights.

She applied the “Page 99 Test” to her new book, Three-Martini Afternoons at the Ritz: The Rebellion of Sylvia Plath and Anne Sexton, and reported the following:

Page 99 of Three-Martini Afternoons at the Ritz discusses the tensions and challenges for Sylvia Plath trying to negotiate her way through the world being a wife, a mother, and a writer. It also explores the crippling panic bird of her writer’s block and how this was linked to location and circumstances. Certain aspects of her marriage to Ted Hughes were unorthodox, but as page 99 highlights: “For all the unconventional aspects of their marriage, and for all of Plath’s ambivalence about which of society’s norms she would reject or accept, there were still elements of tradition that stuck.”

A reader turning to this page would get a good idea of some of the main themes of the book; the difficulties facing women in the 1950s who wanted to succeed in a male-dominated literary discipline, and how difficult that was if combined with marriage and motherhood. But equally the book fails the page 99 test because Anne Sexton is missing (she reappears on page 100). So thematically, the test works, but in terms of subject matter, half is absent. Perhaps this is rather inevitable with a dual biography.

Although the book moves between the two women, the main aim is to weave their stories together and show all the ways in which Plath and Sexton led both parallel but often wildly divergent lives. Having met for the first time in a poetry workshop run by Robert Lowell at Boston University, just for a short period of time, the two women’s lives collided. On a Tuesday after class Sexton would drive them to The Ritz in her old Ford to drink three martinis and talk intensely about life, poetry, suicide, and death. Over dishes of free potato chips they would balance their books and papers on the table, hoping to be mistaken for Hollywood types. Three-Martini Afternoons at the Ritz uses these confessional drinking afternoons as the launching point to explore the lives of Plath and Sexton who, back then in 1959, were aspiring poets. But they were aspiring poets in a cultural moment that did not like ambitious women, or really know what to do with them. Sexton wrote in a letter that she felt as though she was “kicking at the door of fame” which men owned the password for and would not share. This book argues that both women kicked that door down anyway paving a bold and progressive path that the rest of us can follow.