Steven Feldstein is a senior fellow at the Carnegie Endowment for International Peace in the Democracy, Conflict and Governance Program. 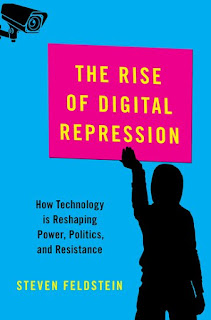 Previously, he was the holder of the Frank and Bethine Church Chair of Public Affairs and an associate professor at Boise State University. He served in the Obama administration as Deputy Assistant Secretary of State for Democracy, Human Rights and Labor with responsibility for Africa policy, international labor affairs, and international religious freedom, and as Director of Policy at the US Agency for International Development. He has also served as Counsel on the US Senate Foreign Relations Committee under former chairmen Joe Biden and John Kerry. He received his B.A. from Princeton and his J.D. from Berkeley Law.

Feldstein applied the “Page 99 Test” to his new book, The Rise of Digital Repression: How Technology is Reshaping Power, Politics, and Resistance, and reported the following:

than the result of a concerted Chinese program to proliferate advanced authoritarian technology.

My research in Thailand led to some unexpected insights.

First, the government is both lenient and harsh in how it chooses to deploy digital repression. The vast majority of Thais have access to a wide variety of information— particularly juxtaposed with comparable regimes in the region. While the government blocks certain websites that contain prohibited content— largely related to the monarchy or to gambling/ pornography— and monitors what people say (particularly Thai “influencers”), the Thai state generally leaves the bulk of its citizens alone. I repeatedly heard both civil society activists and government officials insist that “we are not China,” and that they have no desire to go in China’s direction. However, for a special category of people whom the regime views as a threat, it is adopting increasingly hardline tactics. In the past year, Thai pro-democracy activist Wanchalearm “Tar” Satsaksit, a fierce critic of the military and monarchy, was abducted by unidentified gunmen in Cambodia, three more activists “vanished” during a trip to Vietnam, and a prominent academic critic, Pavin Chachavalpongpun, was attacked with chemical spray at his home in Japan. This troubling behavior is also occurring within Thailand. Another well- known activist, Anurak “Ford” Jeantawanicha, was assaulted by pipe-wielding pro-government thugs for publishing Facebook posts about planned protests. Likewise, Sirawith “Ja New” Seritiwat was sent to the hospital after being beaten with baseball bats by four men the evening before a planned pro-democracy rally. From time to time, the government also makes examples of ordinary citizens as a pointed reminder of the costs of defying the state.

The government complements its digital repression tools with an extensive set of repressive laws and directives that provide wide discretion to suppress dissent and tamp down challenges to the state. Since 2017, the government has enacted a range of new provisions (supplementing existing lèse-majesté and defamation laws) that criminalize actions that violate public morals or run afoul of national security or public order. These laws represent a transition from an informal system of “door knocking”— used by government agents to carry out surveillance or censorship goals— to more formalized legal repression.

Second, key partners in the government’s program of repression are royalist and conservative civil society organizations. Groups such as Social Sanction and the Rubbish Collection Organization have created group pages on Facebook and other social media sites where they “share the personal profiles of alleged lèse majesté offenders” for public bullying. They also report suspected offenders to the police. Among those who are targeted are political opponents (particularly Future Forward members), scholars, journalists, and human rights activists. Reports indicate that the government has trained over one hundred thousand students as part of a “cyber scouts” program intended not only to surveil fellow

The “page 99 test” works well for my book. On page 99, I lay out several main findings from my Thailand case-study — one of the book’s three chapters about what digital repression looks like on the ground (the other chapters feature the Philippines and Ethiopia). The case-studies took months to prepare and represented the culmination of several years of desk research. Thailand was the first country I visited and I really wasn’t sure what to expect — both in terms of whether my expectations for digital repression would bear out, but also how responsive interviewees would be to answering my questions. In fact, I remember being nervous enough about the trip that I planned a back-up field visit to the Philippines in case the Thailand research didn’t pan out. As it turned out, the Thailand research went exceptionally well (as did the Philippines visit; so I included both countries in the book). Once I landed in Bangkok, I was able to secure most of the meetings I sought, including audiences with senior Thai policymakers and intelligence officials who discussed sensitive issues at length — from the Thai state’s motivations for deploying digital tech tools against perceived threats, to Thailand’s sensitive relationship with China. Another interesting fact about the Thailand chapter is that it was the first chapter I wrote. Rather than write the book in consecutive order from introduction to conclusion, I jumped straight to writing the Thailand chapter — I wanted to make sure that I didn’t lose any of the details from that research trip! In that sense, page 99 has a higher degree of relevance than I would’ve anticipated.

Overall, my book makes the argument that governments are leveraging technology against challenges to their rule in new and unexpected ways. From China’s techno-repression campaign in Xinjiang and internet shutdowns in Myanmar and India, to Russia’s struggles to contain protestors who turn to YouTube to outflank the government, activists are in a cat-and-mouse struggle with governments for political control. Even in liberal democracies like the United States, there are disturbing examples of law enforcement agencies abusing facial recognition and surveillance technology for dubious purposes. As the book documents, the digital repression trend is not just relevant to authoritarian states, it also represents a growing threat to democracies.